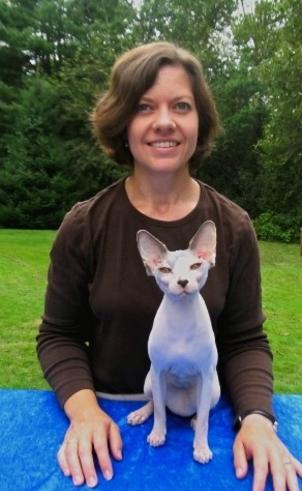 Skinzin Gleek and Lora are now accepted by Delta Society as a Pet Partner's Team!

I wanted to share some good news with you; Gleek and I have recently been accepted by Delta Society as a Pet Partner’s Team. Delta Society tells me that we are the sixth Sphynx PP team nationwide and the first in the New England region. I attached our ID Badge photo just for fun. As you can see, at 1½ Gleek has matured into a beautiful boy. He has such a wonderful personality too. Our Team Evaluators down in NH commented many times on how soft his coat was, and were pleasantly surprised how gentle and laid back Gleek is for his age.

I can’t thank you enough, Dr. True and your wife, for providing me with inspiration, not to mention your endorsement of Judy’s Skinzin Sphynx. I will always be grateful to you Judy for picking the perfect boy for me. I am so thrilled to have Gleek and Jiji in my life. 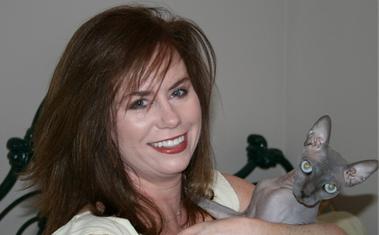 Sharron is pictured here, holding Adonis, one of the TrueZue group.

Grand Premier Skinzin Bak Jak-the-Knife of The TrueZue  and Sharron True, RN (Owner/guardian and MamaKat) have met the requirements for certification as a Delta Society Therapy Team.  Furthermore, the Delta Society confirmed that Jak is the FIRST and ONLY SPHYNX CERTIFIED AS A THERAPY CAT!  He represented his breed with beauty, poise and total confidence.

The Delta Society is a national organization with established guidelines by which Therapy Animals are rigorously trained and tested.  It is a process, involving weeks of classes, shadow visits and training sessions.  Jak was the only cat in a class of about 20 dogs, and he was undaunted!  Jak will now visit hospitals, nursing homes and other settings where he and other Therapy Animals can bring their own special joy.

JAK'S HISTORY: Sharron had admired Jak as a kitten so I decided to surprise her at the 2005 International Cat Show in Houston.  At the conclusion of judging, Judge Lois Jenson was kind enough to make the surprise presentation.  Jak went on to finish as the International Show's 2nd Best Sphynx Kitten,

While an exceptional show cat (2006-2007 Region 7 2nd best Sphynx in Premiership!), Jak seemed to have aspirations of a special calling.  His sweet and outgoing personality contributed to his talents and abilities in facilitating healing and well-being.  We are honored to be a part of the process.

Terry True, M.D. of The TrueZue

The following is a framed write-up placed at the entrance of the J.W. Sommer Rehabilitation facility in Muscle Shoals, Alabama, where Dr. and Sharron True practice:

Animal-assisted therapy has become recognized as an important part of medical treatment for people who enjoy pets.  Our program was started by Sharron True, RN, who went through training with the Delta Society with Jak, the first Sphynx to be Delta-certified as a therapy cat.  We now have 3 Sphynx that participate in the Cat-Assisted Therapy program.  The cats and our J. W. Somner Rehabilitation Unit were featured in USA Today with a full page article on December 4, 2009.

Grand Premier Skinzin Bak-Jak the Knife was Second Best Sphynx kitten at the 2004 CFA International Show.  He went on to win 2nd Best Sphynx Premier in Region 7 in both 2005 and 2007.  Jak is a cream and white Sphynx. 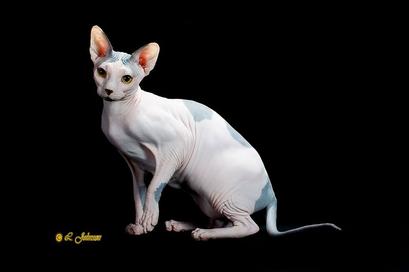 Pam Moore concedes that if someone is accustomed to long-haired cats, a Sphynx can be off-putting at first. But after a Sphynx curls up in the lap of one of her patients, Moore, a registered nurse at J.W. Sommer Rehabilitation Unit in Muscle Shoals, Al, says the animal brings about a transformation in the human. "They bring so much peace and happiness to the patients," she says.

Sphynx cats love to cuddle with people and are as soft as velvet. "They'll just curl right up on a patient's lap and stay there," Moore says. "That's not the training. That's just the way they are."

Only a few thousand Sphynx cats exist in the USA.  GP Skinzin Bak-Jak-the-Knife, the first registered therapy Sphynx in the country, belongs to Terry and Sharron True of Muscle Shoals.

Terry True says holding Jak is like holding "a suede hot-water bottle." When the Trues first started working with their cats in animal therapy, they visited oncology units in a children's hospital where patients were undergoing chemotherapy and radiation. "I wanted the children to know you can still be hairless and be beautiful," Moore says. "The kids' eyes would just light up when they'd see Jak."

JoAnn Turnbull of the Delta Society, which has registered more than 10,000 animals for therapy work, says the kind of connection Jak offers cancer patients is unique. "People can relate to an animal with the same condition and trust them and bond with them," Turnbull says. "It might also give them the extra motivation to get better."

Research shows petting an animal can decrease patient anxiety, lower blood pressure and help ward off depression.  There is also a soothing calm the purr of a cat offers people.  In their new book, Guardians of Being, author Eckhart Tolle and illustrator Patrick McDonnell suggest that animals help connect humans to the divine and make us whole again.

The Trues say they are big believers in holistic medicine, treating the spirit as well as the body. They know firsthand how difficult it is to find peace in a hospital and how animals can heal in a way they cannot as medical professionals. Sharron is a registered nurse who works in the operating room at the Muscle Shoals hospital. Her husband is a family practitioner.  "When they're in a hospital, they can't see their own pets," Sharron says.  "Research has shown patients get many positive therapeutic benefits from the visiting animals."

When Sharron read about cat-assisted therapy several years ago in a Cat Fanciers' Association magazine, she knew her cats were perfect for the cause "because of how people-oriented they are."  The Trues now have three cats enrolled in therapy work (two of them are Skinzin cats!), but Jak broke the ice for them in a dog-dominated world.

"Jak had just retired from shows, where he'd been very successful, and I told him he had to get another job," she says, laughing.

The new job meant Sharron had to take 12 classes with Jak sponsored by Delta Society. The classes teach the owner and animals how to approach patients and how to not be afraid of hospital settings, smells and equipment. Jak was the only cat in his class. There were 25 dogs.

"He wasn't afraid of all those dogs," she says. "He just marched right into the ring and got to work." 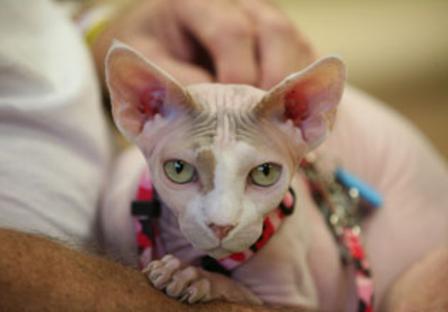 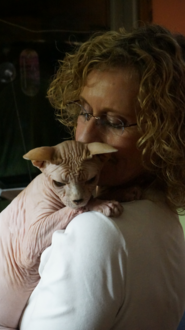 GP Skinzin Queen Nefertiti of TrueZue (Emme)frequently visits local hospitals with Sharron, to comfort patients.  Emme loves her retirement from the show hall.  "It's time for me to get to some serious work helping others!" says Emme.